To lead in the protection, conservation, use, and development of the water resources of the White River Basin. For the welfare of the district and to safeguard for the Lower Rio Blanco County and all waters of the White River to which the state has entitled.

The Rio Blanco Water Conservancy District is a Special District of the State of Colorado, organized for the purpose of conserving and developing land and water resources for the best use of water within the District’s boundaries. The District was organized by a decree of the District Court on November 9, 1990, and shall be a political subdivision of the state of Colorado and a body corporation with all the powers of a public or municipal corporation

What makes us unique?

RBWCD’s area of responsibilities includes the management of Taylor Draw, Taylor Draw Hydroelectric, and Kenney Reservoir as well as a much wider range of oversight.

Attached to the creation of Taylor Draw Dam is a significant inventory of man-made wetlands, rangeland, and managed agricultural land. Altogether the RBWCD manages in excess of 1,200 acres of which approximately 50% of the lands are in various stages of wetland succession, 20% designated for agriculture and wildlife food source mitigation, with the remaining acres left as varying types of rangeland--mitigating the habitat lost with the construction of Taylor Draw and Kenney Reservoir. The vast majority of these lands are open for public use. 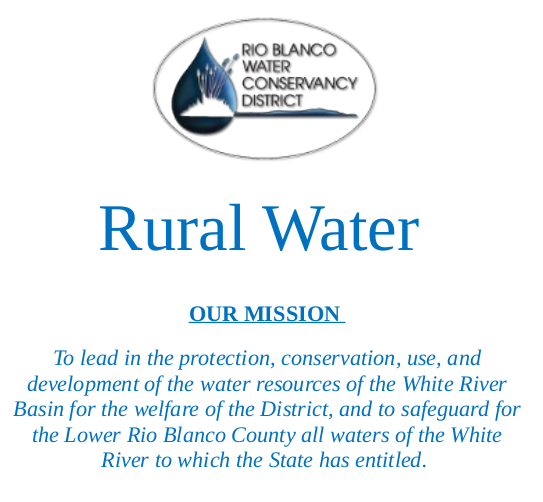